(Some of the fantastic nurses from the Glasgow Blood Donation Centre)

For years Steven has been extremely passionate about donating blood since he sat through a talk from a nurse at high school explaining how by donating your blood you can actually save a life. So he has been regularly giving blood since he was 17. I guess Steven will admit he never thought he would personally see the importance of this kind act of giving until the very worse day of his life had been sprung upon him.

Unfortunately after we found out Francesca had died, my labour went from bad to worse and I ended up very ill. I picked up infections, my body near enough shut down and due to some other complications at the birthing stage the blood loss was great meaning I needed a blood transfusion afterwards. I had no idea how ill had been as those who knew chose not to tell me as I guess they didn’t want to add additional stress to me. Steven did later open up to say he thought he would be going home completely alone as he didn’t think I would make it at one point and to this day he still struggles to talk about it. To think about what he witnessed in that room concerns me as how could anyone really ever get those images out of their minds? But on another note he has such a drive to promote blood donation even more now as he has first hand experience of his loved one benefitting from a transfusion and maybe the drive is even greater considering the traumatic way it came about.

So a few weeks after we left the hospital Steven had his reminder to give blood through the door and booked his appointment to donate through the Scot blood website. A few days before his appointment I had started to get very unwell again and on the actual morning of his donation I woke to a pool of blood and instantly we were both transported back to the memory of that hospital room. I called our local triage ward to ask for advise on what I should do and understandably I was in an extreme case of shock. The nurse was lovely, tried to put me ease and explained I should contact out of hours to arrange to be seen but as I was finishing the call she kindly asked how our baby was doing not knowing that our baby had died, meaning I needed to explain what had happened to Francesca and this almost tipped me over the edge. There was no way I could find the strength after that to go through the NHS OOH service and explain our story again to numerous more people. while trying not to worry about what was happening to my body. I just couldn’t do it.. there was no more strength left in me. Instead I insisted I get up and go with Steven to his appointment and Steven urged me to at least speak to one of the nurses there for advise which again I dreaded having to do as I couldn’t go through telling anyone else that day that our baby was dead and never coming back.

By the time we got to the centre I was a pale “peely wally” mess of a girl and the nurse came over to chat to me. She was so lovely.. so caring …understanding and had the most calming manner. She gave me advise which made me instantly feel better and made me promise I would eventually contact out of hours team. Even though they were run off there feet they made time to sit with us both , listen to our background and why Steven was donating blood. We definitely did not feel like “just another number”.

The nurses set Steven up on a bed to start the donation process, checked his iron levels by taking a tiny bit of blood from his finger. They checked he had ate that morning as your always advised to have a substantial breakfast/lunch beforehand too. The nurse also provided him a questionnaire about his medical and travel history. Instantly I knew from the poster at reception that am no longer able to give blood as I have had a blood transfusion and they don’t allow that if anyone has had this from 1st January 1980 (additionally you are also not allowed to donate if you have gave birth within last 6months or are currently pregnant). They made him comfy and even pulled a chair over for me to sit with him which was lovely. The timescale provided to give blood is around 1 hour but genuinely Steven was in and out that chair in 15 minutes. He loves the “treat” part at the end of it where he happily skips over to the café area to receive his Tunnocks Tea cake and juice. I have since been contacted on Instagram by an English counterpart who expressed her concern that Glasgow has better biscuits on offer than her local donation centre. Scotland 1 – England 0 !!

It was quite an emotional experience for us both especially given the rough start to our morning and the nurses had let us know they felt honoured in a way to have met a couple who had been positively affected by their work, maybe even more so given the tragic circumstances. They also let us know that based on the hospital I was in it was 99% chance that the blood I received during the transfusion had been donated at their centre. So that was quite a realisation to think only a few weeks before someone had been sitting where we were now and donated the blood I now had within my body. I imagine not a lot of people can say they’ve experienced that.

So to that person who was O- and donated your blood at the Glasgow donation centre in January 2018 ….Thank you as you may have helped save my life that day!!

(The peely wally mess that is me, Steven and our lovely nurse)

I have included the website below where you can read up on blood donation within Scotland and if you are in other areas within the UK please click on the “support” tab within menu where you can find the links to your local donation centre. ( Apologies if you are reading this from overseas as I don’t have the knowledge to point you in the right direction of where to locate your local centre)

if you have had experience of blood donations or  feel you may have been converted into a blood donor after reading our story then please let me know via the comments as we would love to hear from you. 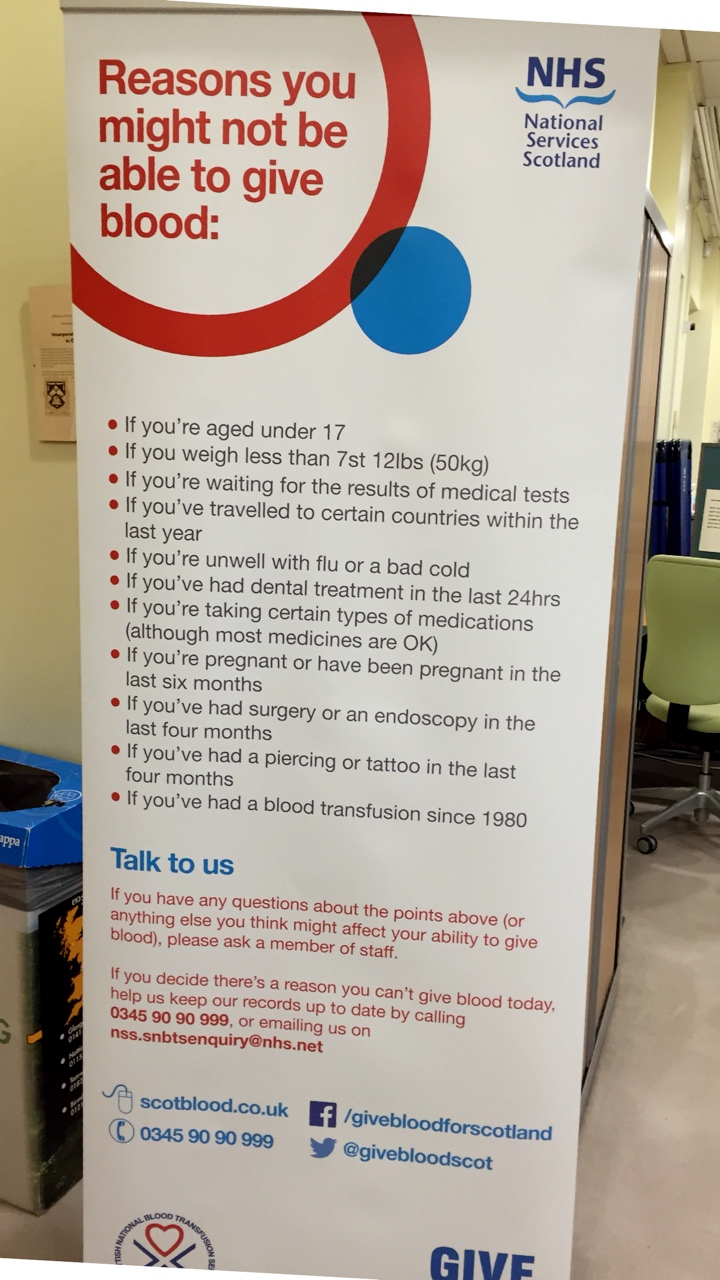 One thought on “Blood Donation Day”

Part of the BritMums Network